As promised, here is the first post showing some of the storage solutions I have in my studio for craft supplies.  I have started with wooden shapes as I have literally hundreds of them from 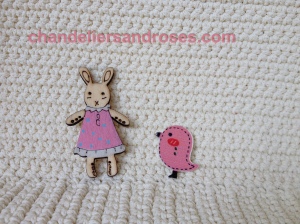 bunnies and birds to cupcakes and fairies, from watering cans and flowers to hearts and stars, from buckets and spades to butterflies and chicks, from wooden letters to dolly pegs and so, so much more.

Then of course, there is the Christmas wooden department, with dozens of angels and gingerbread men as I use absolutely loads of these from September onwards, reindeers and stag heads, Christmas trees and baubles, stockings and santa heads – I know – it’s madness but it all has to be housed.  I also have lots and lots of angel and fairy heads in different sizes, gorgeous wooden mushrooms, tiny clothes pegs, beads and wooden sticks – I use these for masts when I make driftwood boats – and       we won’t even mention the several bags of driftwood because frankly that would spin my head!!! 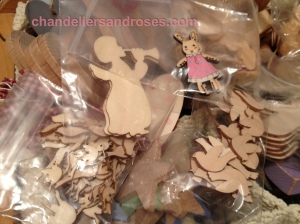 I already had loads pre-September but obviously I had to buy many more (yes really – I had no choice!) for all my Christmas making, so although it was semi organised into bags, all the new stock just caused bedlam and I really could not see what I had without pulling loads of stock out everywhere, adding to my already ‘Hoarder next Door’ roomset lookalike. Some items, like Angels, also needed sub dividing as I have angels for hanging, angels for bunting, angels for cards etc. and numerous styles and sizes. 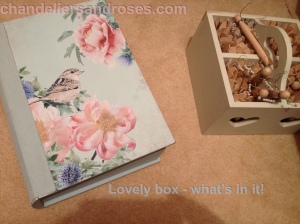 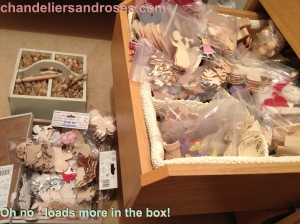 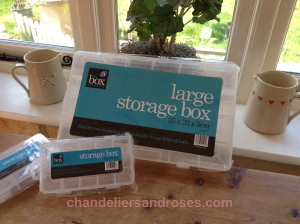 I bought some of these plastic storage boxes which you can find in lots of places such as The Range and Hobbycraft.  However, the cheapest place I have found them is in a store called Home Bargains and the tiny ones are approx 59p, the medium £1.49 and the large £2.49.  Do definitely shop around as some stores sell an identical product for £8.49 for the large one – madness.  Basically, they have loads of little storage compartments in them and you can take out some of the dividers. 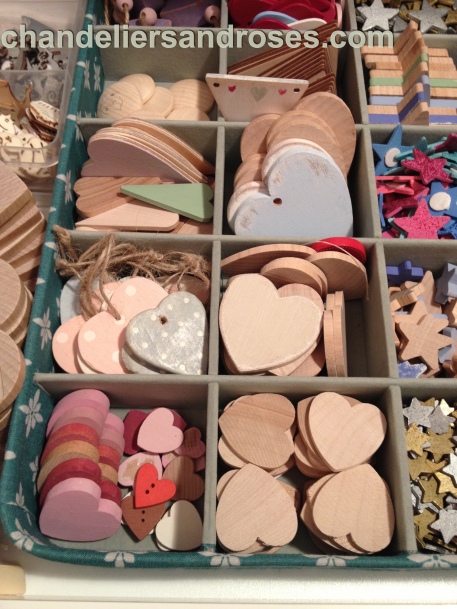 I also used a fabric jewellery tray on the right hand side as; firstly I needed something with larger compartments for all my hearts and stars and secondly, I wanted to utilise the space I had to the nearest centimetre. 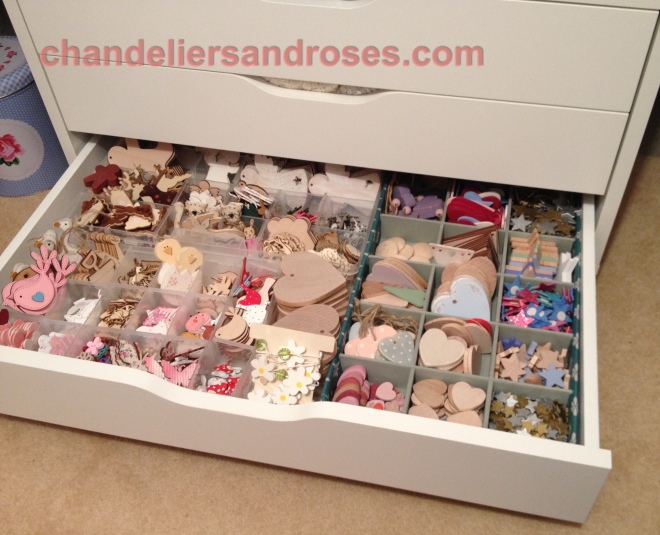 As you can see, I used a combination of different sizes as that suited me (large, back left and medium front left – I had a gap in the middle where I inserted the large hearts and white flowers) but it does of course depend on where you decide to keep them.  I put mine in the Alex chest of drawers from Ikea, mentioned in my last post.  I also decided to take the lids off carefully and keep them underneath the box itself – they all just fit nicely  That way if I do a workshop away from home, I could in principle take the whole box.  In reality, I probably wouldn’t as I would ‘cherry pick’ the items that I need but it’s good to know that I could! 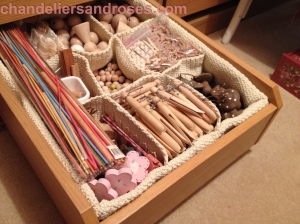 For the larger items such as dolly pegs, wooden mushrooms, angel and fairy heads etc., I used the existing drawer with a fabric inner divider (the Komplement drawer divider £15.00) – both are from Ikea – I have a run of drawer units which are actually the drawers designed to go inside Ikea wardrobes – Mr Chandelier cut the wardrobes down as we initially had them elsewhere,  (how amused was he with that one!) and we topped them with worktop.  I have several of the fabric dividers bought purely for my studio – I think they are meant to be used for bathroom supplies and underwear etc., but as with everything in life, they are, what you want them to be!

So there you have it, the first of many storage posts, but I can’t tell you how fantastic it is to be able to pull open a drawer and find what I need instantly – heaven!  It also makes ‘filing’ away everything I didn’t use so much quicker too.